The Governor-General, His Excellency, General The Honourable David Hurley AC DCS (Retd) and Her Excellency Mrs Linda Hurley have paid tribute to Australians who have struggled through difficult times yet remain committed their community and helping each other out. They made the comments during a candid thirty-five minute virtual conversation to mark the start of Kind July, the month-long campaign promoting kindness by Stay Kind (formerly the Thomas Kelly Youth Foundation). The Governor General is patron of Stay Kind. Stay Kind’s founder and CEO is Ralph Kelly who lost his son Thomas in 2012 after a random attack in King’s Cross. Ralph’s second son Stuart took his life in 2016. Both boys died in July, aged eighteen.

In a virtual interview with journalist Jane Hutcheon (former presenter, correspondent and creator of ABCTV’s One Plus One program), the Governor General said his two years in office has been marked by a large number of natural disasters and tragedies. Beginning with a few relatively quiet months in office, His Excellency cited the 2019-2020 bushfire season, drought, floods and then the COVID-19 pandemic. “It has piled on,” he said. “What else has got to be thrown at us?”  “But for all that,” he said, “we call it here at Government House, a richness of spirit in people and we just see that writ large. Yes, we see the rat-bag end and we know that everyone has them, but there’s a real…richness of spirit in people. They are resolute, they’re a pretty tough lot, but they do look out for each other.” 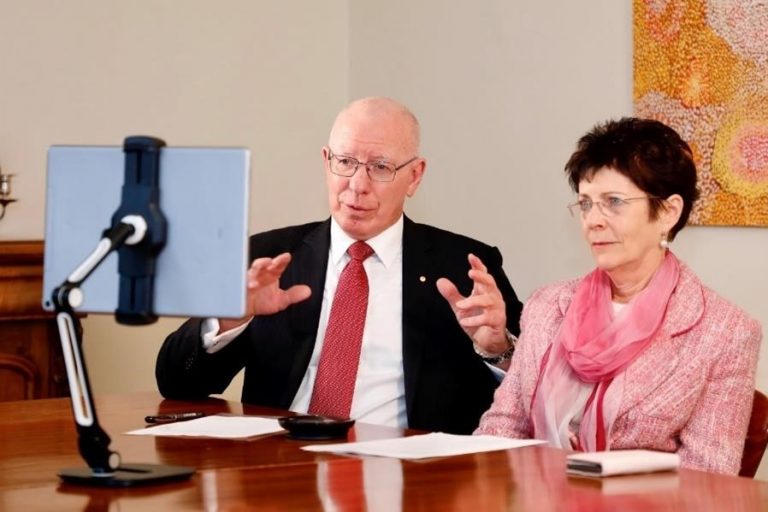 Mrs Linda Hurley added, “Kindness and caring is one of the most special things human beings can do with each other…it’s certainly been a trying time for our country (and) for the world in regards to the pandemic. And a lot of people have been having a tough time. And that’s why kindness is so important; to be kind and caring. When the bushfires happened everyone was showing kindness. People were just donating things. And I just thought, “Wow, what a fantastic country we live in, amazing people.” And then when I saw people fighting in the supermarket for toilet paper, I thought, “My goodness, it was everyone for himself? It was just a shock.”

The Governor General was asked about whether Indigenous Australia was a neglected topic in recent times. His Excellency replied that in current circumstances, many issues were competing for attention with the pandemic. “It’s very hard, frankly, for anyone else to get oxygen at the moment. And I think it’s unfortunate because (debate about constitutional legislation) is a big issue at the moment, but it’s time will come in one form or another. But when we travel, we do have one of our priorities of engaging with the Indigenous community, looking at issues and trying to be helpful where we can.”

Their Excellencies recently attended the Cooktown & Cape York Expo on the eastern coast of Cape York Peninsula. They watched a performance of a re-enactment of the first recorded act of reconciliation between Indigenous people and white Australians, which took place between Captain Cook and the local Bama people 251 years ago. “Can you imagine looking down and seeing a big Aboriginal man hugging Captain Cook? This is not an image we’re used to and everyone (viewing the re-enactment) is in tears. I kept saying to myself, “What have I seen here today?” And I think what I’ve seen is a vision of what Australians would like to happen,” the Governor General said.

Naturally, kindness was the theme of the Stay Kind Conversation. Asked how he stays kind to stop himself from feeling overwhelmed, His Excellency replied, “I’m an optimist by nature. My advice to people would be to… look at what’s happening here. Be thinking about how we get through this, whatever the past. If you’re standing still, hand-wringing, then you’re not going to go anywhere… Work your way through many of the things that are in front of us. And for the big issues that we can’t control, even as Governor General I can’t control where the economy goes or whatever, but I can do my bit to help others.”

For her part, Mrs Hurley said that when she feels overwhelmed she likes to sing and she likes to make other people sing. She promptly produced a track on her smartphone and began to sing an original song she has written called Stay Kind.

You can watch the full interview here: https://youtu.be/7q7xY9ZddUg

Sign up for our special #kindjuly conversation series here: https://www.staykind.org/join-our-movement/kind-july-event/

Tell us how you were kind this week!

Tell us how you were kind this week!

Tell us how you were kind

Item added to your cart

Continue Shopping Go To The Cart